Kashmir is considered to be the Paradise of Earth because of its amazing and worth seeing beauty. Not only the beauty of this place is seamless but the traditional foods of this region are also heavenly. The foods that have evolved from the Kashmiri cuisine are alike rich as that of its beauty. As we date back to its history, the Kashmiri cuisine is made up from three different cooking styles including:

This one is the Kashmiri curry that is really popular among different regions of Kashmir. The curry is made from the crunchy lotus stem and yogurt along with the flavor of cardamom, ginger, bay leaves and Kashmiri spices.

Don’t mix these leaves with the spinach as they look much like the spinach leaves. Tender the haak leaves for almost 30 minutes along with the mustard oil and typical spices. Haak is really a specialty of Kashmir that is cooked in winter for a filling and filthy meals.

You can call it the Mutton Ribs or more precisely, you can also call this Kashmiri dish as Tabakh Maaz. Mutton ribs are cooked along the creamy milk. Wrap the ribs in the besan batter and turn them golden until tender. If you are one of the fans of wazwan cuisine, then these Kashmiri style ribs is a must try dish.

If you are a lover of potatoes and want something different, then here is your way. Dum Aloo is something that is beyond description. These are extremely satisfying dish that is having the fried potatoes mixed with yogurt and aromatic spices to give this dish an amazing and outstanding flavors.

Here is another dish for the vegetarian dish for the veg lovers. Khatte Baingan is considered to be the outstanding specialty of Kashmir. The dish is having the complete blend of tangy and natural flavors of egg plants. The egg plants are golden fried and then simmered in the zingy gravy.

Saag is considered to be the gem of the Kashmiri cuisine. This dish is not only popular in Kashmir but also in the other regions of India and Pakistan. Saag is cooked in the mustard oil and special Kashmiri spices. It is served hot with butter and maize roti.

Another one of the most special dish of Kashmir is Paneer Chaman that is having the fried cottage cheese mingled with the diverse combination of spices. This one is like the cheese lover’s dream come true. Cheese is cooked in milk and comes out brown.

Next dish is another very popular dish of Kashmir that is having the rich flavor of yogurt and ghee. The curry is cooked with the mawal flowers and the fried lamb pieces are simmered in the blend of curry. A hearty curry goes well with the steamed rice. 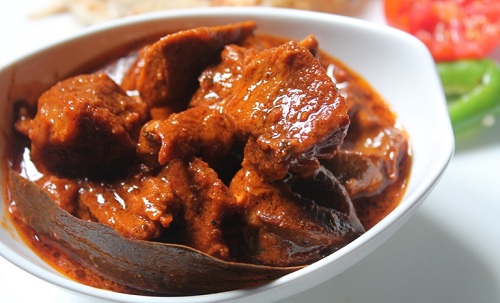 Another dish straight away from the Kashmiri cuisine is the Rogan Josh that is having mutton in it. It is like a dream come true for all the mutton lovers. Rogan josh is having the liberal use of spices that definitely leaves your mouth to water.