India is a diverse country where beautiful landscape is one of its many features. Anyone who visits India cannot leave without being mesmerized by its magnificent mountains and mighty seas. Having said that, this is the natural landscape beauty that India possesses along with a long coastline along three sides of its Southern part. India has also been famous for the mighty big ancient forts all across the entire continent built by the Kinds of a bygone era. But today we are going to have a look at the 10 most beautiful sea forts in India which are bound to take your breath away. With a view of infinity from the top of these forts, you will feel life like never before.

So if you are ready, fasten your seatbelts and come with us on a journey to the Sea Forts in India.

Diu, of the Daman and Diu, is one of the most exotic coastal areas in India. It is also among the top visited tourist attraction for the foreign travelers in India. The Diu was initially a Portuguese territory which means it is more or less, highly influenced by the Portuguese style of living and architecture. This is what reflects in the Diu Fort which is as huge as you could imagine. Built on the shore of the Pacific Ocean, The Diu Fort gives you an unimaginable experience of looking at the limitless seas from one of the several hundred windows of the fort.

Who does not know the Aguada Fort which got famous after it was featured in a mega-blockbuster Bollywood movie, Dil Chahta Hai? This Fort and its accompanying lighthouse overlook the Sinquerim Beach and the Arabian Sea. Goa, a previously known Portuguese territory is bathed in the colors of it. The magnificent Aguada Fort built at the Candolim Beach of South Goa is an ultimate example of the Portuguese architecture and design. Add it to your Bucket List to visit this Fort when you are travelling to Goa.

If you believe in fairytales and the magnificent Sea Forts which are actually built on an island, then you must visit the Murud Janjira now! It gives you the feeling of the Barbie movies and the beautiful island Forts. It is an oval-shaped island situated in the coastal village of Murud in Maharashtra. This Sea Fort has strong walls which are the reason of its existence centuries after it was made. Overlooking at the Arabian Sea, the Murud Janjira Fort has a vast yet fascinating history. Missing out this Sea Fort should not be your doings, therefore, go visit it NOW!

Situated along the southern coastline of Maharashtra, Khanderi and Underi are two Forts which originally served the purpose of a harbor. The two Forts were made in order to bring in the incoming Ships from distant continents. The harbor was later transformed into forts to preserve attacks from other countries and keep an eye on the Sea pirates. It overlooks at the Arabian Sea and its vastness. We3 have all heard of twins, but island twins are the newest thing and you should really visit the island twins which have similar Sea Forts.

The Kolaba Fort is built by India’s most influential king, Chhatrapati Shivaji back in 1652. He built this Sea Fort in order to keep an eye on the foreign invaders those of who attacked from the sea route. The Sea Fort also worked as a protection from the King of Janjira who was the enemy of the Shivaji Empire. After centuries of providing protection to the ancient empires, the Kolaba Fort still stands firm as it is. Can you go about travelling Maharashtra without visiting this Fort? If no, then what are you waiting for?

Another magnificent Sea Fort made by the great King, Chhatrapati Shivaji was an eye watcher at the neighboring Janjira Dynasty. It was built in 1664, almost a decade after making the great Kolaba Fort. This is a two-mile-long Fort which possesses huge stone walls which scared away the enemies. This Fort has a tree, huge water reservoirs which were made to preserve the rain water back in the day. History cannot be learned by studying books but by visiting these Forts that have witnessed it.

The Vijay Durg Fort is one of the oldest Sea Forts in India. It is situated on the Girye Coast of Maharashtra. Surrounded by the great Arabian Sea, the Vijaydurg Fort is a sight to remember. Its high stone walls are now covered with the flora of all kinds. The Fort is now an attractive tourist place for the view it offers is unmatchable of any other. The crystal blue waters around the Vijaydurg Fort is soothing and rejuvenating to eyes and mind. 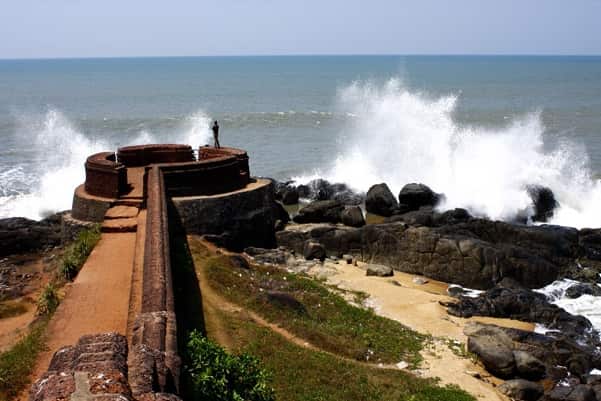 This is one of Southern India’s very few sea forts. The regular crashing sea waves at the stone walls of the Bekal Fort gives you the feeling of a live fairytale dream. The Fort overlooks at the Indian Ocean and the vast, unlimited waters. Its unique view is the most amazing thing you will ever see. Standing on the top of this Sea Fort will give you a feeling of triumphant. The Bekal Fort should be on the top of your list when you decide to visit Kerala.

The Suvarnadurg Fort, also known as The Golden Fort was a great pride of honor to the ancient Maratha Empire. This is one of the Marathas’ many sea forts that they built in order to protect their territories from the sea invaders. Situated along the Konkan sea cost on the small island of Harnai, the Suvarnadurg Sea Fort was also a shipbuilding island. It is now entirely covered with trees and plants due to abandonment, but it offers a magnificent view of the Arabian Sea.

This is not a Sea Fort, but a Sea Castle situated in the Agartala, in the middle of Lake Rudrasagar. This is the largest ever Sea Palace in India painted in magnificent Maroon and White. It is situated on a little grassy island in the middle of the lake. The Palace is now transformed into a magnificent Hotel to allow the travelers and its tourists to have a royal experience. The bedrooms overlooking the Rudrasagar Lake and mountains at the distance are unmatchable.