Mithai is an Indian Hindi language TV show, airing on ZEE TV Channel. It is a Hindi remake of the Bengali serial with the same title. In the Bengali language, the show has become famous among users, which is why the makers decided to make a Hindi remake of it. Now it is up to the Hindi audience whether or not they like this serial. The serial started airing on 4 April 2022. This show is produced and directed by Arvind Babbal under the production of Arvind Babbal Productions Private Limited. Ashish Bhardwaj and Debattama Saha are in the lead roles. Here detailed information about the sweet serial, its story, wiki, timing, cast name etc. is given. 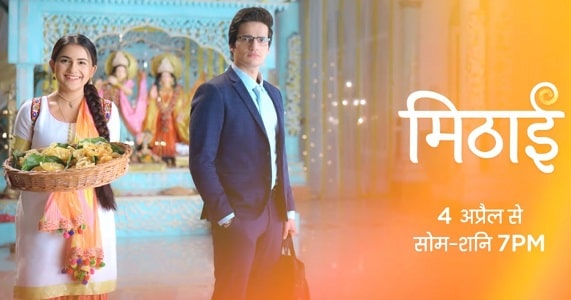 In this serial Debattama Saha is playing the character of Mithai and she feeds sweets to a family. Whereas Ashish Bhardwaj plays the role of Siddharth who comes and says if one hates eating sweets. The concept of the Mithai serial revolves around a young passionate girl who sells sweets and is fondly called by the name Mithai. Sweet’s high-spirited personality and nature make everyone around her feel alive.

The plotline of Mithai- Har Marz Ki Dawai is all about a jovial young girl whose name is Mithai. She is continuing her family business of selling sweets in Mathura. Mithai’s happiness and personality always bring a smile to everyone’s face. When Mithai was a kid, her father presented a pendant and he wanted him to make sweet dishes. She wears it as the sole symbol of her late father while spreading happiness through his deeds.

Ashish Bhardwaj as Siddharth, the male lead role of this show is a software engineer and he hates sweets and his inherited sweets business. The fact is Mithai’s show revolves around the saleslady who sells sweets with love and happiness. The serial becomes interesting and takes a twist when Mithai’s love life and marriage come to the spot. In coming episodes, you will be seen what magic sweet Mithai creates with his love Siddharth. Watch online on Zee5 or stay updated on the Zee TV channel to watch the joyful personality of Mithai.

The broadcast timing of the serial Mithai is 7:00 PM, Monday to Saturday only on Zee TV Channel. The approx running time of this serial is 20 to 25 minutes. There is good news for the viewers, if they miss the old episodes then they can watch the repeat episodes on the OTT platform.

Here is a complete list of cast original names: