The growing use of vegetable oil all over the world has given rise to the production of Canola oil. Vegetable oil is generally used in China and India and in other EU countries.

Ranking of Canola as oil crop

You may be interested to know the ranking of Canola as an oil crop in the world. Although it used to be the sixth largest oil crop, the increase in vegetable oil usage has made it rise to the second position recently. It is expected that by 2025 the production of Canola oil is to rise by 40%. In the last decade, the export of this oil has also doubled. 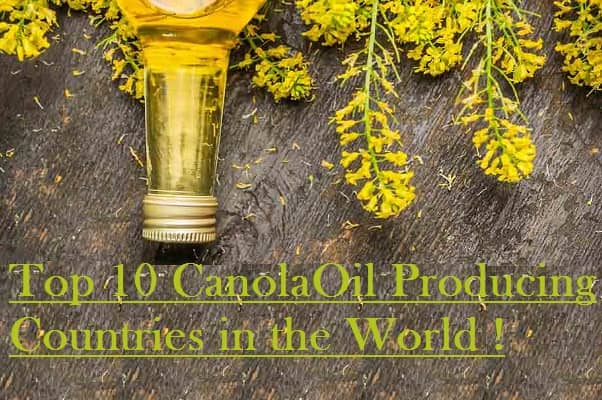 Though we are talking about Canola oil production, it is prudent to know how this oil is used. Mainly this oil is used by U.S., China, Japan, Mexico, and Pakistan. In the year 2008 U.S. used 2,800 million pounds when the production was 1,000 pounds. In the year 2010, the U.S. consumption increased to 3 billion pounds. U.S. is the biggest importer of Canola Oil, and it is estimated that 70% of the oil produced in Canada is imported by U.S. It is also seen that major global fast food chains like KFC, Taco Bell, and McDonald’s have started the usage of this oil for making their food products. Canola oil is basically used as food and for industrial purpose. As a food it is used for:

The industrial usages are

Why is this oil usage rising?

The health benefits that can be had are

How is this oil produced?

It is good to know how this oil is produced from the seeds. The Canola seeds are rich in oil. The liquid is extracted by heating the seeds at high temperature. The extracted oil is then refined to eliminate the unhealthy subjects that are present in the oil.

Countries producing most of Canola Oil

If we look worldwide, then we will see that this oil is produced in various countries. Let us check out the top ten countries producing Canola Oil globally. They are listed below in descending order:

It is seen that Canadian economy benefits a lot from the production of Canola Oil.

Why these countries lead the show

The worldwide trade of Canola Oil

If we have a look at the worldwide trade of Canola Oil, then it can easily be seen that Canada leads the show. The exports made from Canada account for half of the world trade. 90% of Canola produced in Canada is exported either as seed, oil or meal.

Where is Canola produced in Canada?

It is estimated that 43,000 Canadian farmers grow Canola. The western provinces of Canada namely Alberta, Saskatchewan and Manitoba are the main producers. British Columbia, Ontario, and Quebec also have a substantial share in the entire production of Canadian canola.

The production of Canola has a potential impact on Canadian Economy. It gives rise to $19.3 billion of economic activity, has generated 250,000 jobs with a salary payment of $12.5 billion.

The timeline of Canola production in Canada

If we have a look at the largest producer of Canola Oil in the world then we will see the below facts:

Impact of Canola in Canadian Economy

Canadian authority has set a target of increasing the production of Canola to 52 bushels per acre by the year 2025, and there are particular reasons for that. The reasons are:

There are certain factors that need to be addressed so that the Canola farmers do not face problems. The factors are:

Trade agreement: There should be proper trade agreement so that farmers get their profitability and do not face financial problems.

Facing the environmental hazards: Proper care should be taken so that there is no excess usage of herbicides, building soil having proper carbon percentage and using less fuel so that proper yield of Canola can be achieved.